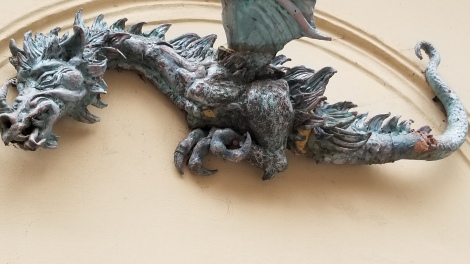 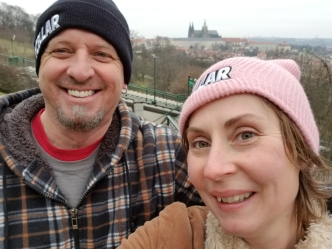 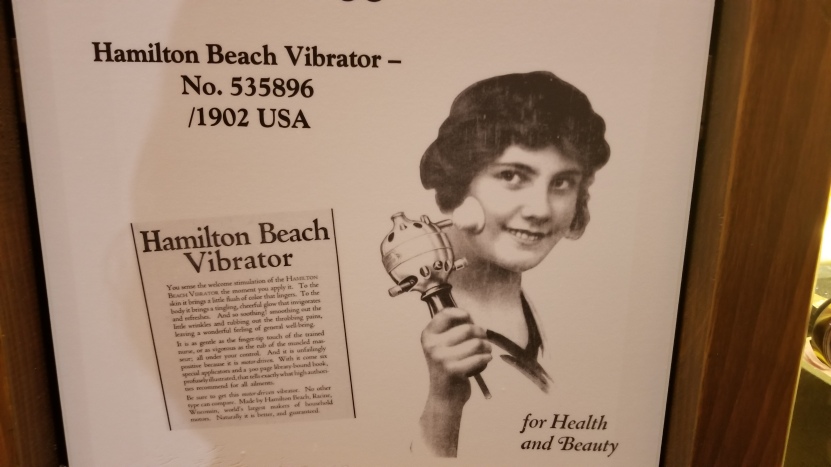 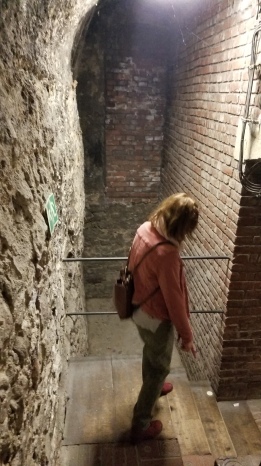 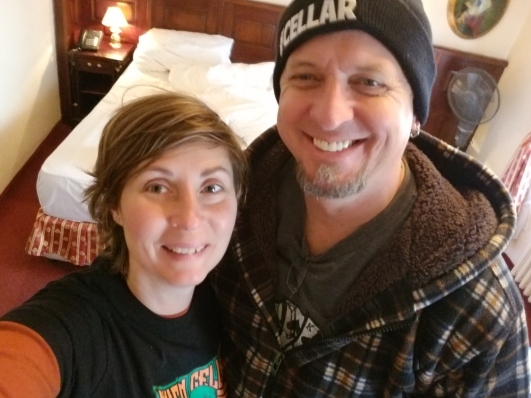 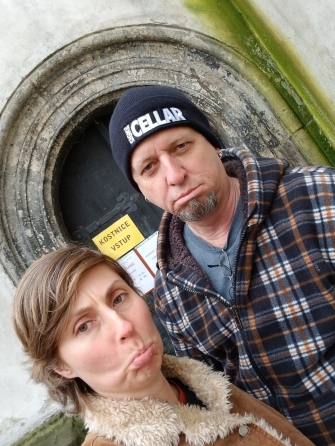 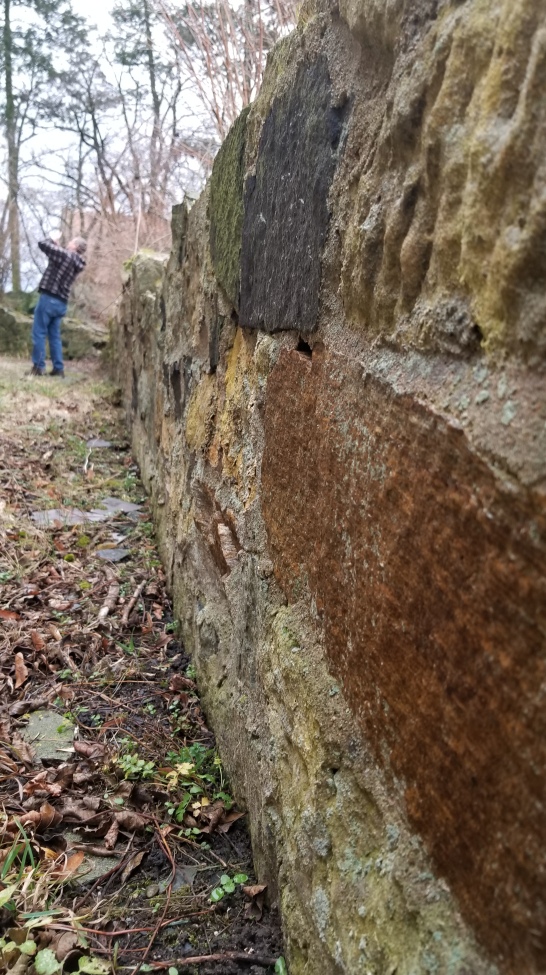 We spent the next day walking again, beginning with the park at Petrin Hill seeking out a fantastical-looking art gallery in the heart of this forest.  In spite of ringing the door and knocking for 5 minutes, we were unable to rouse the owner which was quite unfortunate and I suppose in hindsight we should have called ahead for a reservation.  Regardless of this disappointment, we had spent the hour prior meandering the pathways and taking in the many sights of this natural setting so it was hardly a wasted effort.  Quite the contrary.  Earlier that morning from a day lit excursion to the Charles Bridge we noticed a wall creeping up the distant hill and were now in danger of walking headlong into it.  Signs instructed that this was the Hunger Wall built in the 1300’s by King Charles IV.  Speculation about its construct suggested that it was built not only to defend the castle and lesser city, but also as a project to employ the poor of the time.  Walking these paths through the forest and along the wall I felt a deep connection to this area.  It was not just the ordinary bliss I feel walking through nature rather it seemed deeper, more of an innate bond with the region.  I cannot help but wonder if the man and his art would have helped shed some light on this.

The walk down was much more direct as we had the lay of the land and we set off for our next stops; the KGB museum and the Museum of Alchemy and Magic.  Oddly, on the way up the street as instructed by the GPS, we were stopped by a police check and later wondered if it was due to the proximity of the looming Prague castle.  The streets in this area were tight and it was impossible to find a parking spot near either of these museums so we made the executive decision to prowl around Prague Castle instead of seeking these other sites out.  I remain certain this was the best approach given our time as we were embarking to explore the fairy tale castle that could be seen from the Charles Bridge day, or more spectacularly, at night.

We approached this behemoth structure with the same laissez faire attitude one might expect while looking for parking at a grocery store; Cameron pulled right up to the gates as instructed by the GPS.  Palace police were again ready to check the car over when the female guard asked, “Tourists?”  When we replied that yes we were, she smirked and shook her head, pointing to the parking lot across the street.  We shared a laugh and Cameron pulled a u turn (well, more of a 47 point u turn as the roads were still narrow and now there were tourists in the way).  We were willing to pay to enter some of the beautiful cathedrals and palaces but found the lackluster approach to sales on the part of the cashier annoying so saved our limited Czech Koruna and spent the time looking from the outside instead.  This afforded a slightly different, yet still remarkable vantage point from the top of Petrin hill.  We appreciated the sprawling expanse of Prague which included a number of spired buildings, a larger crowned one and the strangest looking TV tower to be found rising 300 m above everything else smack dab in the middle of all these old buildings.

I’ve been breezing over the parts where we nap daily but will quickly note that we were cold and tired after hiking the entire morning away so we did end up in bed for a couple of hours that afternoon.  However, as we had more on the agenda, we rose bright eyed and bushy tailed as only two adults can do after a solid 2 hour afternoon nap.  Sarcasm intended.  The topics of our next ventures were of high interest to us both and it was easy to overcome any leftover grogginess from the short interruption as we wandered over to the Museum of Torture and Sex Machines Museum respectively.  Two completely different topics, yet in some circles the paths converge.

The torturous tools were stark and stern against white walls and simple explanations of their usage presented unceremoniously on laminated posters.  Most if not all the apparatuses were recreations, however, it was difficult to remain unaffected by the exhibition of the depths of human cruelty and malice.  While I have seen pictures of many implements used to carry out torture, there is something to be said for seeing the devices in person.  It would seem that historically most if not all the punishments were carried out by the church against heretics or other naysayers.  Being a person who chooses not to label my spirituality and even further, would call my believe system that instead of a prescribed religion, the message was not lost on me.  I am grateful for my Canadian rights and freedoms.  Particularly when touring the next museum.  I will spare the gory details but I have to say that I appreciate the freedom allowed for by the invention of many of the contraptions displayed here.  And while the 1920s era pornographic peep show at the end was not to my tastes and preferences, I’d be lying if I didn’t say it was interesting to view the movie with a group of other people.

We became aware of an underground medieval tour under city hall and decided to spend our last morning in Prague creeping about in tunnels.  Our guide toured us aboveground through the chapel, some offices and what would normally be the back-end of the astronomical clock before our descent.  Surprisingly, these subterranean corridors were well-lit and quite spacious as these were former houses of nobles of the time.  Winding along through the former streets, homes and even jails was like stepping back to that era, sans the dirt, hunger and frustration.   The city streets were raised to their current elevation over the years because the adjacent river has a tendency to flood yet these corridors remain intact as cellars and in this case, a tourist attraction.  As part of the tour, we climbed (ok, took an elevator) to the top of the city hall tower, another vantage point to view this beautiful city in all its glory.  I became teary at the reminder of how much more of the city we did not see than we had as we now had to check out of the hotel room and begin the pilgrimage to Melnik, our next ossuary.

Getting out of the city was uneventful and the highway was busy and well maintained, however, we opted to exit and took smaller secondary roads through little towns.  For the most part, it is unremarkable to drive, or rather, passenger in another country.  Two main points of difference that stuck out for me were the enormous pipeline that followed the road and the nuclear power plant off in the distance.  While slightly off-putting at the outset, I cannot say we suffered any harm from either of these things and thus simply chose to accept these differences.

Melnik Ossuary was in the cathedral of St. Paul & St. Peter but when we arrived, there was a sign on the door indicating they were closed until February which was disappointing but not the end of the world.  It also afforded us the opportunity to take more time and explore back roads on the way to Kutna Hora which is the way we like to travel anyway.  I will say we safely arrived at Kutna Hora but this is where that journey ends so that I may go into more detail about the Sedlec Ossuary in an exclusive post.

View all posts by Daphane Nelson

5 thoughts on “Prague in a day, Melnik and the drive to Kutna Hora”