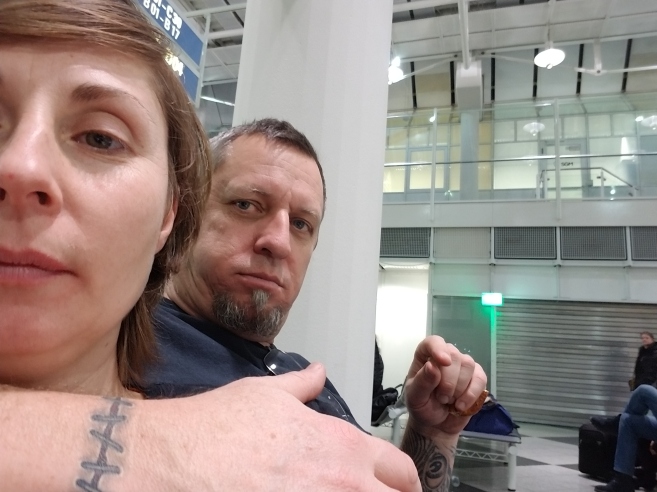 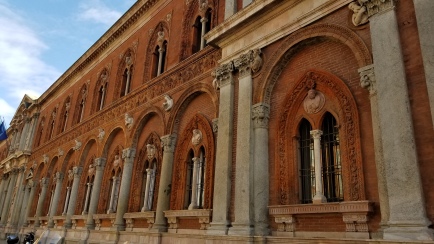 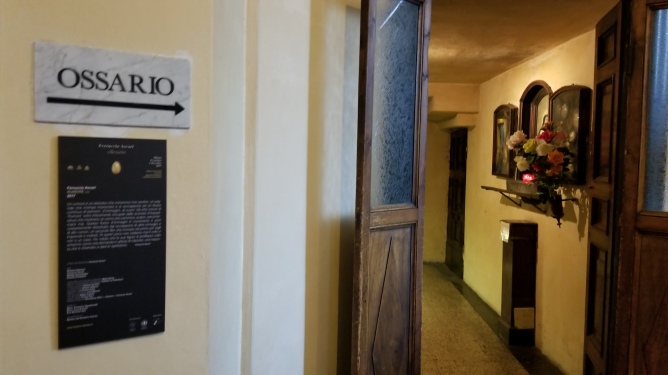 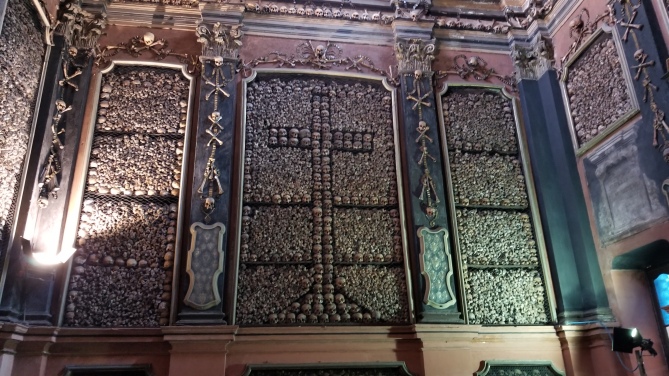 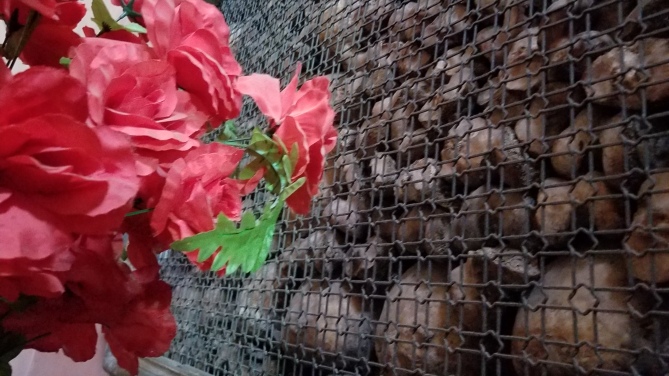 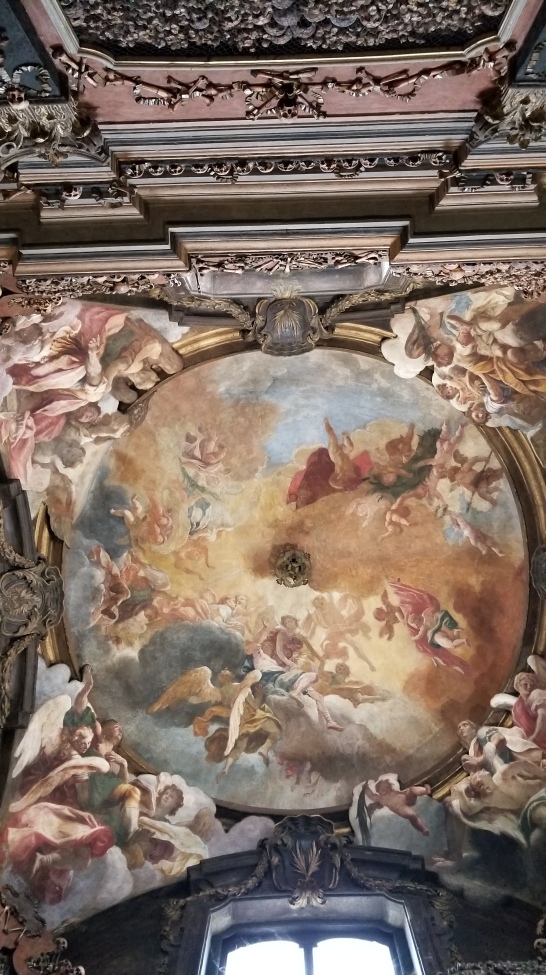 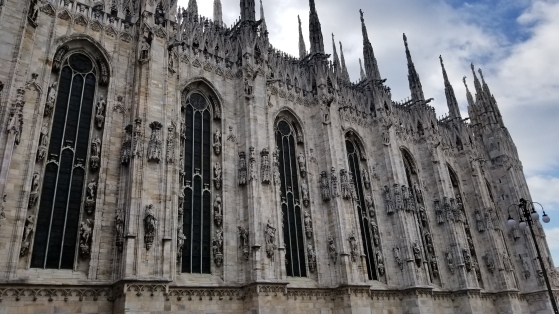 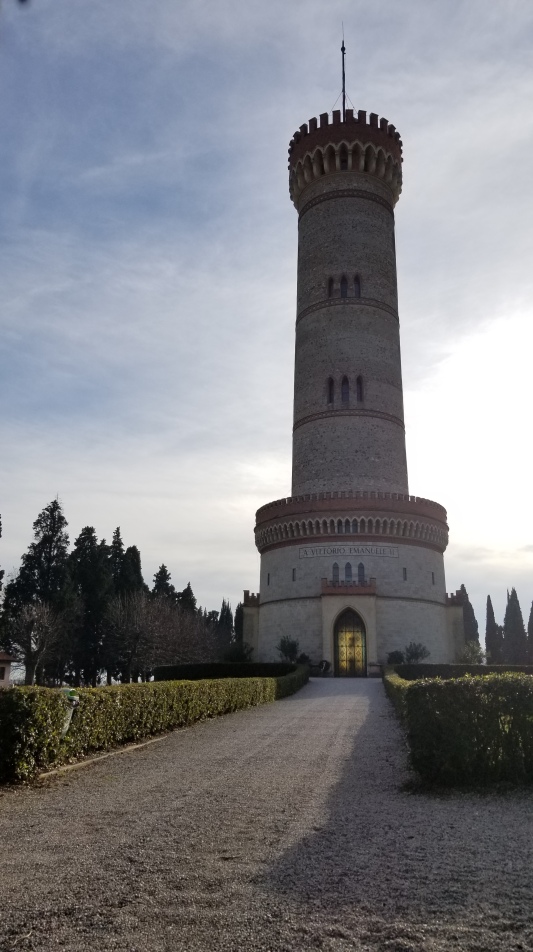 This is not me giving up on Austria whatsoever.  I do, however, recognize that it has become difficult to recount from past tense and that I would like to get current.  What better way to accomplish this than by starting a new blog post from a new country?

But wait, I do have a few things to say about how we got here.  We spent the day before in Salzburg and flew out of nearby Munich as the flights from there were substantially more affordable to Italy.  We were pleasantly surprised by our cute little bio-hotel, didn’t even know such things existed but they used solar panels and claimed to be carbon neutral, which is an amazing feat for a hotel. We had driven in snow to arrive and it continued all night.  Not building up but it did make everything slushy and cold and wet.

We had come to Salzburg as the stopover for the flight and found a skull-themed graveyard online but the receptionist at the hotel gave us a Salzburg city tour pamphlet and we found that they had catacombs.  Further investigation revealed that they were empty but because they were carved into the side of the huge chunk of rock in the middle of the city they were a must-see.  As luck would have it, situated on top of this rock was an enormous and if I recall correctly, one of the oldest medieval fortresses in Europe.  We could not resist this either so we now had a rather full agenda.  As I’m not going to digress any further into Austria today (ha ha ha) I will continue with Italy.

I had booked the hotel near the Milan airport as it appeared to be a quick 1 km walk from the arrivals terminal.  Yet another lesson about how things appear on a map and how things actually are because we unequivocally required the shuttle.  Apparently nobody wants people playing chicken on the freeways here.  I was shocked as the van pulled up to our hotel, it was beautiful and seasoned, looking like something out of a movie scene.  The driver swept us along the circular driveway, parking right in front of the hotel lobby and I felt like a movie star.  Or I suppose more appropriately, a really fancy version of myself.  Our flight had been delayed by about an hour and we had arrived at Malpensa airport around 11:30 pm, just in time to drop into bed.  Check in was painless, and also humourless, so rather than trying to carry the conversation any further, we found our room.  It has been a crap shoot, each room has had its own appeal and high points and low points.  This was spacious, had a king bed and a long bathroom chamber complete with a toilet a shower and this was our first encounter with a bidet.  I think I’ll write another full article about those another time.

The next morning with breakfast out of the way, we jumped in the car to head to Milan.  Keep in mind by this point we have traversed the streets of Prague & Brno, the highways between there and Vienna, Vienna itself and then more highways and things along to Munich.  All relatively painless, all relatively fun, the directions relatively straightforward and the drivers were at least, yes, relatively predictable.  Cameron’s first mention of drivers in Italy was to observe how regularly cars floated side to side on the freeway, doing 120-150 km/h at times and that was absolutely a sign of things to come.  In a grocery store in Canada, a shopper might come around the corner unexpectedly and without making contact automatically reply, “I’m sorry,” just for being in the way, not even making physical contact.  Everywhere else that I have been, I have observed that people have no personal boundaries and have no problem getting up close in a crowd.  Italian drivers are the same on the road.  On, what many might consider to be a 2-lane street, we witnessed as many as 5 vehicles moving forward together.  Scooters bob in and out seemingly carefree but it does appear they are well practiced at the art of weaving through unscathed.  Factor in that the data for the maps is a tiny bit delayed making navigating and therefore driving quite a bit different and admittedly much more difficult than it had been to this point.

We sought the San Bernadino Ossuary in Milan and while the directions kept track of where the building was, we could not seem to get any closer than a kilometre to it and thus opted to park and walk the distance.  Similar to Vienna (which you wouldn’t know about since I haven’t written about it) the streets are narrow and the buildings at least 4-5 storeys high making seeing things beyond the lane we walked impossible.  Our only plan here was again to see the ossuary and then head out on the highway to find some smaller chapels on what we were calling ‘The Circle of Death.’

We walked by the university and a group of students headed the other direction, led by a professor and a young woman wearing what appeared to be a laurel wreath on her head.  I wondered what she had accomplished to earn that honour.  As we approached, what we would consider to be a straightforward church by this point, we found the sign for the ossuary but there didn’t appear to be anyone taking tickets or directing traffic in the right direction.  Obviously unsure of ourselves as we opened the doors, a fellow of unknown relation to the operation pointed in the direction of the ossuary and simply asked us to make a donation.  Cameron pushed 10 euro into the box and we joined a small group of others in the small chapel adjoining the church.

Each experience with an ossuary has been unique for me and this was no different.  The hallway in to the ossuary was lined with what looked like memorabilia, but in the sense of large lockets one would wear or carry to remember someone who had passed along.  Some were plain and others ornate but they all seemed to serve the same purpose.  Having said this, I admit to having no knowledge as to their actual usage and I’m merely surmising.  As I walked into the pretty little chapel I realized that not only was the chapel above ground but it was also decorated like many of the cathedrals we had visited.  Vaulted painted ceilings, some sculptures, an alter and a few rows of pews.  It was nice to see it had not been relegated to the basement out of sight and possibly out of mind.  Some of the bones were arranged as decoration and others were housed behind a grating so that they could be down closer to the public without the risk of being unduly disturbed in this final resting place.  I actually do not recall the origins of the dead here, however, I must say I appreciated the manner in which they have been long remembered.  There were quite a few people visiting the chapel when we arrived but per our usual habit by this point, we lingered long after the last person left.  It is impossible to make the acquaintance of everyone within a memory chamber but going on general feel, every place we’ve visited has conveyed utmost respect and reverence for its’ dead, and this was no exception.

Once back outside, the Milan Cathedral beckoned and we obliged.  We almost missed this massive, Gothic structure amidst the erratic drivers and the narrow streets.  Luckily we had to walk that kilometre to the ossuary otherwise we would have missed this monument and the adjoining square.  Its’ inclusion here is only a distraction providing a bit of eye candy as we only had time to walk around the beautiful building before leaving to our Circle of Death tour.

We found our way back to our car by circling back to the ossuary and taking the same route back, it seemed to be the safest way.  Cameron asked if we could leave Milan with 5 or fewer turns and somehow, I think Google maps actually came through on that one.  The Circle of Death was to include 3 small ossuaries all within close vicinity, however, I had not completed my due diligence prior to leaving the hotel that morning and I realized en route that one of the three was closed for renovations.  Despite an email requesting a tour that day, we did not hear back and were not able to attend the Custoza ossuary.  We did, however, see the San Martino and Solferino chapels which were in close proximity to each other.  These were very interesting as they both commemorated the fallen soldiers in one of the many European battles.  I could go into detail about it or I could point you to the website for the Monumental Complex of San Martino della Battaglia which will do a better job of explaining it.

Arriving at the first in San Martino, we expected to climb the tower, as it appeared to be open on the website.  Unfortunately, none of the grounds were open, with the exception of the chapel we had driven over 100 kms to see.  Thankfully, one of the huge doors had been left open, inviting us in, otherwise we may well have given up on the quest to meet the individuals who had died on the fields in battle.  Upon entry, I was reminded of the many Remembrance Day ceremonies I have attended in my lifetime.  With this exception of beholding the war-rugged remains of those who had fallen in battle and thanking them for their ultimate sacrifice.  This purpose-built chapel was yet another way to experience how some remember and revere their dead, particularly those who lost their lives in pursuit of the safety and freedom of others.

We drove another 10 kilometres to the chapel in Solferino.  This building was similar to the structure we had just left and was beautifully situated at the end of a long, tree-lined road.  Again, a stand-alone memory chapel built in reverence of long-dead soldiers and again, an example of perfect solitude and trust in fellow humans as there were no others around.  Consequently, we were not asked for an entry fee at either this or the prior chapel and I have to say it felt truer and more correct as a result.

This was a long day but we held off booking a hotel until we were on the road after the last ossuary because we didn’t know how much further we’d feel like driving.  We opted for a city called Parma, near Reggio and yes, we found that the cheese Parmesan Reggiano is made near there.  I don’t recall exactly the criteria used to determine the hotel we stayed at, although, I do have to say price is always a factor.  As we pulled up to the place after dark, neither one of us could believe what we saw.  It looked ancient yet amazing, a huge building that neither of us could identify.  It would turn out to be a former monastery and that our rooms were converted from brothers’ chambers.  I will likely write a horror novel about our stay there as it was the creepiest place I’ve ever slept.  However, I would stay there again and highly recommend others do the same.

View all posts by Daphane Nelson

5 thoughts on “Welcome to Italy”